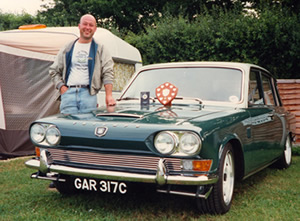 Chris was born in Slough in 1960, by the age of 10 took an interest in Karting, by the age of 16 Chris and his dad Alf built his own 100cc kart, which was subsequently raced with some success in endurance events.

In 1978 Chris purchased a Triumph 2000 MKI MJH758H, as a result of liking the 2000 owned by his father since the early 70’s – Chris considers them a versatile and practical performance car.

Not liking factory routine, Chris went self employed in late 1980, with a combination of mobile welding and motorbike tuning.

Chris started to develop his own range of products and advertised them in the Register magazine Six Appeal. To some extent Chris carried on development where the factory left off. Not wishing to earn a bad reputation for selling cheap sub-standard parts, quality was always put first where possible.

The Triumph business peaked in the early 1990’s. Then in 1993 Chris saw the potential in marketing polyurethane suspension bushes. Chris established the SuperFlex brand and was the first in Europe to market PU bushes for classic and performance cars. 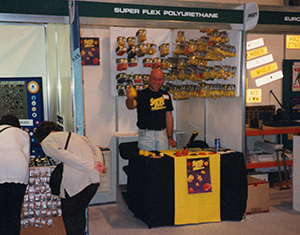 In the mid 90's before the days of e commerce websites, the Superflex brand was promoted at show stands and by magazine advertising. Back in the day, most bushes were primarily Yellow, and even Red or Orange to differentiate from rubber. Once polyurethane was accepted in the market place, a transition was made to a more subtle dark Blue then primarily Black, although we can provide in colours shown to special order: 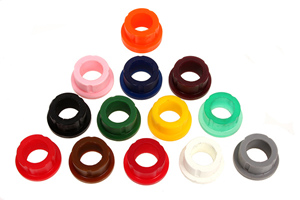 Superflex now manufacture in; 50, 60, 72, 80, 88, 92 & 98 shore A to optimise performance and durability (tolerance +/- 3 points). Many production hardness grades are applied in various positions around the car, depending on the load in that location – as tested and pre determined by us suitable for road to fast road use. As a customer, you do not have to choose the hardness, unless there is an option on our listings. For certain applications we can make bushes typically in firmer grades to special order.

To simply blanket a car with one hardness and call it: comfort, dynamic, performance, race, road or touring displays compromise or limited production capability and doesn't work.

In 2010 we decided it was in our best interests to make a transition to UK manufacture, reducing shipping and air freighting from halfway around the world, thus reducing our carbon footprint and generating jobs for local workers. Our UK base originated in the early 1970's, combined with our 25 years experience in automotive suspension, this results in a formidable working relationship. Our PU is vacuum flasked before pouring which means less air inclusions. We now have tighter production tolerances - pu is machined to within 0.2mm where required and we are manufacturing far more complex products than previously possible, especially where bonding pu to metal.

All our UK manufactured product uses British sourced Stainless Steel Crush Tubes & Shells. Whilst Bright Zinc Plated (BZP) steel may suffice in locations such as the Australian Outback, the American Southwest and other dry climates throughout the world, in cooler, wetter climates - especially where roads are salted - this is often not the case. Unlike rubber bushes that torsion pivot on their bonding to the crush tube, PU bushes rely on their crush tubes as bearing surfaces. Be under no illusion that a smear of assembly lubricant will be a substitute for stainless steel. In time, grease gets displaced allowing water to enter between the tube and bush as the bush flexes in use. When water - especially salted water - enters the rust sets in. Once a crush tube becomes rusty, the surface acts as an abrasive to the pu, clearances increase, more water enters, play develops and the bush fails.

At Superflex, we are also car enthusiasts and put ourselves in the place of the customer, while sadly, some suppliers simply cut cost or just have a corporate indifference to this matter. Indeed, some suppliers at the bottom end of the market don't even bother to zinc plate their tubes.

Superflex polyurethane suspension bushes are not mere copies of the original rubber bushes. They are individually designed to take full advantage of the special characteristics of polyurethane - its durability, and exceptional friction-absorbing capability not hitherto attainable with rubber.